Wednesday, 2 November 2016
*this post would have been so much more apt had I managed to publish it actually on Halloween and not three days later... But I spent so much time on it that I didn't want to just abandon it! So please pretend it's October 31st when you read this!*

As a Blogger, and general Social Media addict, I like to empathise all of the benefits and positives that can come from things like Twitter and Facebook; believing that the majority of the publicity that they do get is negative - usually focusing on online bullying and the use of inappropriate images. With that in mind, I've been using the recently developed 'share memory' function on Facebook A LOT. If you don't use Facebook... the share memory function allows you to see what you posted on your Facebook account on that exact date each previous year right up until you first signed in (2008 for me!).
When I was unwell, this would've been detrimental. If I'd had this feature in 2012 when I was the most unwell, I would have looked back and seen how normal things first were/seemed in 2008 when I had my fresh start at a new school and with new friends. And that would've made me sad because I would be wishing I could go back to then, regretting that I didn't 'appreciate' those days at the time, and thinking of all the things that I would've/could've/should've done differently. Things would be worse to have just looked over the previous three years; I'd have looked at how bad things were in 2009, 2010 and half of 2011 and felt hopeless, being convinced that things would never get better; reminded of just how badly I'd felt in those moments that I posted upset status' and meaningful song lyrics. For the remainder of 2011 (towards the end of the year) I would see my most stable period, and question whether that really was 'stable' if I was going out drinking regularly, and then I'd see the photos from those night-outs where I was laughing and dancing and singing... And happy. And I'd hate myself for turning back to self-harming.
When you think of all that; I guess it makes sense (some might disagree to me using that word) that I was attempting suicide up to three times a week Spring 2012.


And now that we're towards the end of 2016 (8 years with a Facebook account!), and I'm in recovery... Everything looks different... 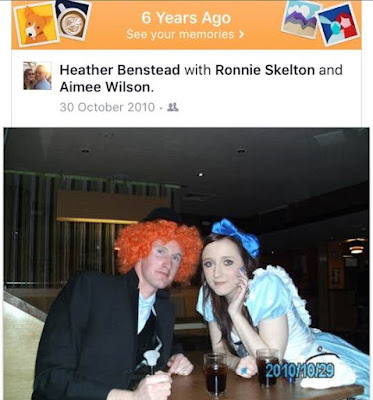 Halloween-ish 2010
I was in a relationship. I'd been diagnosed with Borderline Personality Disorder for a little over a year and had begun taking medication for my hallucinations. It was because of them, that I was hesitant about going on this night-out and after a couple of hours I wanted to go home.
Also, doesn't Ronnie's costume look SO realistic?! I had such fun watching the shopkeeper show R the 'correct' way to wear his hat and wig. 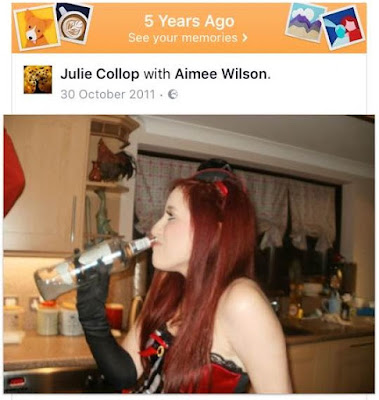 Halloween-ish 2011
Here, I was at my most 'stable' point in my mental health; having finally began Dialectical Behaviour Therapy (DBT) - which is the recommended treatment/therapy for those with BPD. I'm not even sure that I properly recognised this time... Probably because it was more that everyone else was telling me I was stable but I knew the voices were still angry and getting confused that I wasn't  self-harming?'; I just remember thinking that I was being a normal girl. Doing what my friends were doing; drinking, kissing boys, dancing in bars, falling over, uploading millions of photos, laughing, singing, and being that girl who everyone would message to ask if I'm going out that night.

Halloween-ish 2012
There was no Facebook post this year. At this point I had been detained under Section 3 of the Mental Health Act 1983 and a patient in Cygnet Hospital, for about three months. In the talks around planning the admission, I'd been told that I'd still be able to use my laptop at the Hospital because not only would it make communicating with friends and family much easier (the Hospital was almost 200 miles from my home), but it'd also be 'something to do' in an effort to minimise self-harm. Like many things in mental health services, this wasn't the case once I was actually in the Hospital and my only time on a computer was by requesting time on the Hospital one at the weekend. Eventually I had the use of my laptop added to my care plan and after I'm NOT Disordered was born, the staff understood how beneficial it was to me and allowed me to have it even when I was put in an empty room for self-harming in my own. 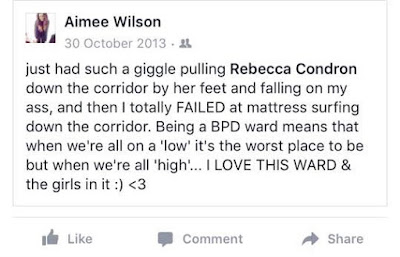 Halloween-ish 2013
We were having a rare, but much needed, good day on the Hospital ward. With everyone on the ward being diagnosed with Borderline Personality Disorder, and a key symptom of that being unstable moods (see this blog post from only a few days before this status to see just how unstable it really is); it was inevitable that something negative would happen every day. It varied from the girls getting into huge arguments and physical fights, to witnessing someone being revived by staff and paramedics. But the positive side to it, was that we could feel like we understood one another more than anyone else ever could, and so in times of need we'd know what to say and when to back off. A lot of the time it meant that when a few of the girls were hyper or 'high' (in terns of mood), it became almost infectious and when the staff weren't in a good mood (70% of the time) they were pulling out their hair! Our antics included covering the door signs with more honest names, having food fights, and mattress surfing down the corridors. These moments made the place that little bit more bearable. 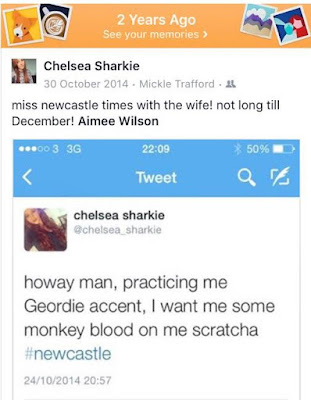 Halloween-ish 2014
My best-friend was still the girl who'd lived two bedrooms away from me for almost two years in Hospital. Chelsea had been my 'buddy' (the patient assigned to help you settle in and show you round etc) right from the moment I first got into the Hospital, and in the beginning there was a lot going on for each of us and we were both shy (yes, I was once shy!) so it took a little while before we let our guard down and really started to be friends. Chelsea was discharged from Hospital before me but we were determined to stay in touch and to see each other even after I was discharged and over 200 miles away from her. And we did that. Although we don't talk very often now, she is still in my life and I do still miss our times together. 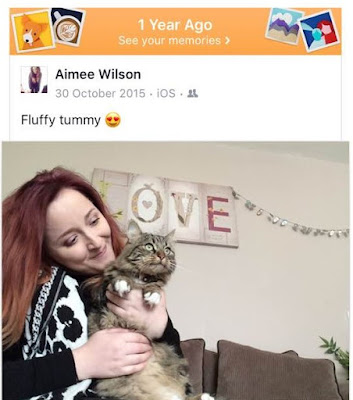 Halloween-ish 2015
Dolly and I had our first Halloween together in our little home. I was, eventually, discharged from Hospital in December 2014 and Dolly moved in a week later so 2015 was our first Halloween together. As you can see by the grip I have on her, she couldn't have cared less. But I was excited! I was going to throw my first party in my new home so I went all out on the Halloween decorations! In the end, I couldn't be bothered to actually carve my pumpkin so it was just face-painted! 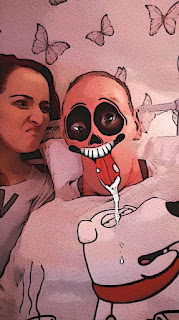 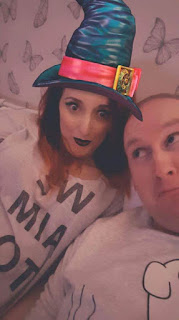 Halloween-ish 2016
It's quite weird how some things seem to have come full circle...!! This year, I'm back with Ronnie except it's now completely different (explanation to come in another post). We'd planned to watch horror movies and carve pumpkins but being the useless, undecisive, couple that we are, we ended up cleaning the house - stopping halfway to sit on the Kitchen floor and have a few drinks, ordered a takeaway and binge-watched House on Netflix. My second favourite moment was when it was about 10pm and Ronnie said 'we're not going to do them pumpkins now are we?" A few minutes later, I'd moved the coffee table, put down a bin bag to cover the floor and Ronnie sat there carving his pumpkin! My favourite moment? These SnapChats! We spent almost 20mins playing around with the filters, and wetting ourselves from laughing with the ones that change your voice! The vlog that'll feature this will be on my YouTube very soon! 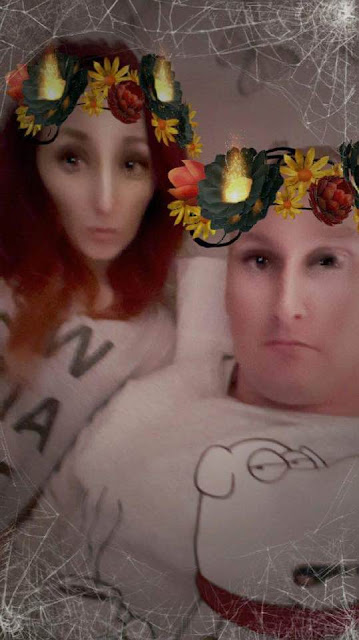 What a difference one year can make! I
n 2010 I was too numb to actually feel 'love'.
In 2011 I was being told how well I was doing. I thought that I was finally a 'normal' 20 year old.
In 2012 I was sectioned in a psychiatric hospital with no laptop; and no hope.
In 2013 I was still in hospital but things were getting better, and I was making the best out of a bad situation.
In 2014 I was almost at the finish line in leaving inpatient services (I was actually on leave for Chelsea coming to Newcastle).
And last year, I was where I'd only dreamt of; in my own home with my own fluffy cat.
This year, I'm head-over-heels in love with the man who was by my side from the beginning...

And this is what I love the most from this Facebook feature: that it helps prove that things can get better. They can change. Those horrible moments will pass. Suffering will end, and the laughter will come.