Thursday, 23 March 2017
[Note: all photos are credited to Vicky McNally and Cygnet Healthcare and Raf Hamaizia with all of them edited by myself via Moldiv] 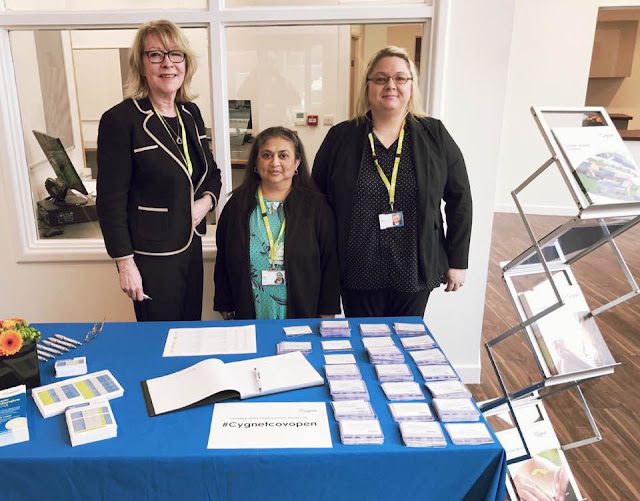 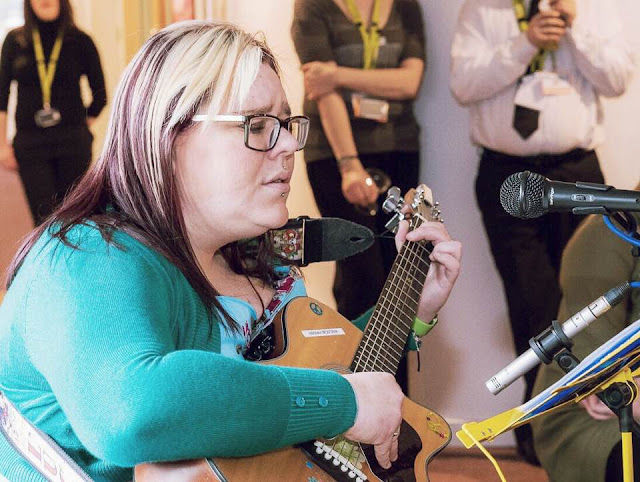 [a fellow Expert by Experience: Hannah] 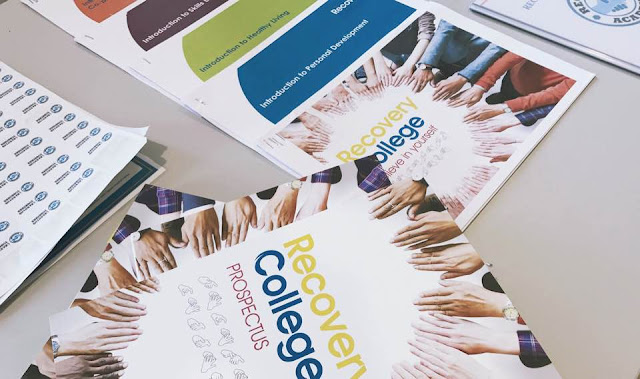 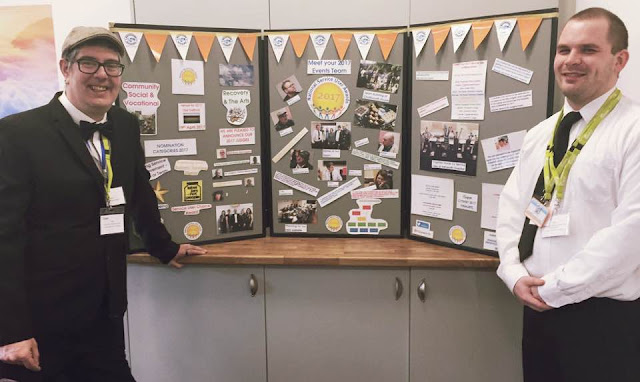 Having arrived late to the Opening; I joined a few people (including the legendary Raf Hamaizia) on an impromptu tour of the Hospital; led by Bronwen Corby, Operations Director.
Like most Hospitals (perhaps a helpful tool in dispelling mental health stigma specifically towards Psychiatric Hospitals) Cygnet Coventry was - or at least seemed to be to me - a rabbit's warren maze! I was frequently asking where abouts we were in relation to other parts of the hospital... Bronwen was incredibly patient! Because of this, I'm not going to be the greatest in my descriptions but I'm going to give it a shot!
Cygnet Coventry is specifically all-female and for those aged 18 and above. It's services include:
Dunsmore Ward - a female Psychiatric Intensive Care Unit [PICU]
Middlemarch Ward - Locked Women's Rehabilitation
Ariel Ward - Female Personality Disorder
Ariel Court - Transitional Living Units 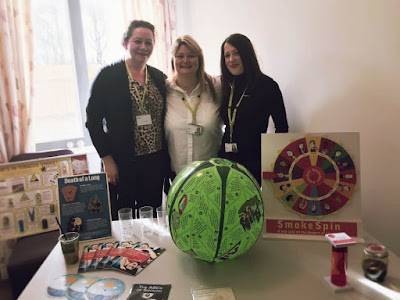 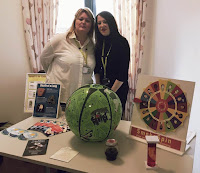 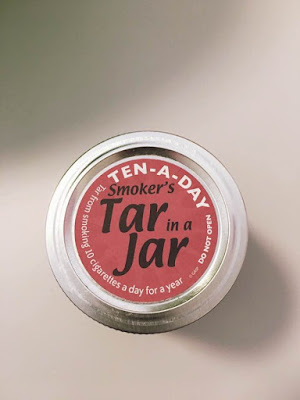 Throughout the tour, we visited rooms for OT facilities; including a fully functioning Beauty Salon that would provide Service Users with the opportunity to have hair cuts, massages and other beauty treatments with external, qualified beauticians/hairdresssers etc. Rooms that gave us the opportunity to see other programmes, support, services and facilities available to those in Coventry; e.g. a Cease Smoking campaign, a Recovery College, the National Service User Awards, two gyms, and a library; to name, but a few.

During the tour, we were told that they'd had an Interior Designer come in and present different colour schemes for current Services Users at the Cygnet Hospital Derby to choose/and decide on one to use throughout the Coventry Hospital. So, understandably, even just the corridors and stairwells were impressive; continuing the purples and greens of the colour scheme through the carpeting and large canvases.
The Ward bedrooms were very impressive and, I thought, a lot larger than the one I'd basically lived in for two and half years at the Bierley Hospital. going beds were large singles and had purple, pink, and green in the bedding; with the pattern going through to the curtains. The light coloured wood on the bed, the bedside table, and the large desk, general storage shelves, cupboards and wardrobe helped to make the room feel larger than a dark wood would have. The chair at the desk was the exact same design/shape as those in Bierley but it had the same shade of purple as that which had ran through the fabrics in the room. Also like Bierley, the bedrooms had simple, en-suite bathrooms, except instead of the well-worn floor and chipped yellow walls of my en-suite, these were a brand new, clean, and shiny white with marbling to the counter top and the frame of the mirror. Then the dark grey was taken from the marble and carried through to the front of the counter unit (where I'd kept all of my toiletries; and was frequently teased for having so many products!), the skirting board, toilet seat, and flooring. The shower seemed to be pretty much the same design as the one I'd had with a touch-sensitive pad to turn it on - I'm not 100% on the 'off' functio 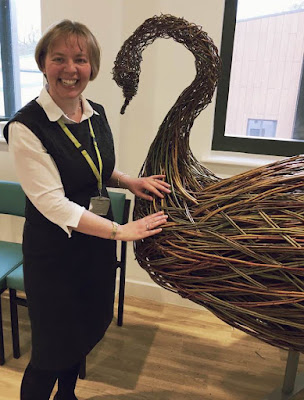 n as ours had a self-timer and would turn off after so long. Then just a basic 'shower head.'
Each ward had large, bright, airy, and open communal areas with TVs, book shelves, and an abundance of chairs! Apparently though, there was one for each service user and I explained how when Bowling Ward was full, there weren't enough seats in the sitting room for Reflection and Morning Meetings. Which kind of defeated the point in us challenging staff for not attending the meetings when it was compulsory for us; they'd either have to stand, or sit on the floor! Then that makes you feel inferior to staff... It's crazy (perhaps not the best word to use...) how much difference tiny (and often overlooked) things like that can make. But they do. And as important as it is to talk about the safety aspects to the hospital; it's also important to discuss things like this. The things that perhaps weren't considered in making the practical decision of having a chair per service user. And these things might sound petty or insignificant to onlookers but when you're living there; and struggling with the millions of reasons why it'd be better if you were dead, feeling inferior and forgotten; does not help. 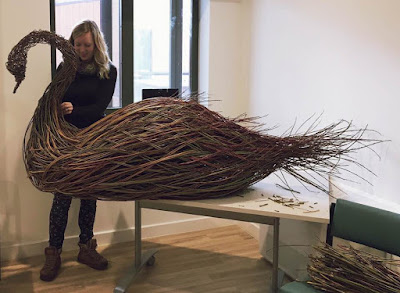 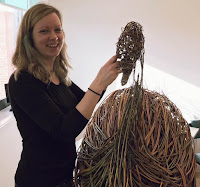 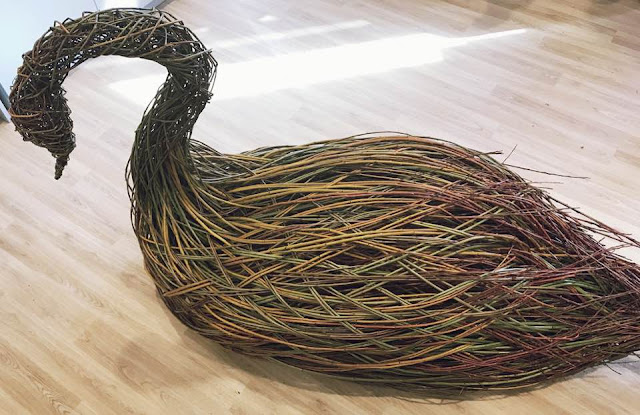 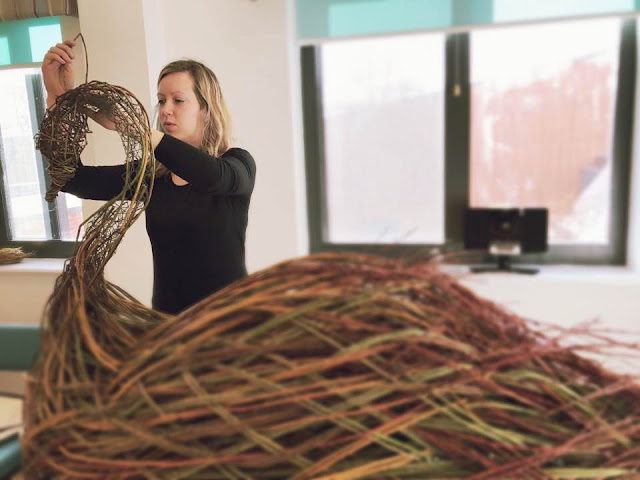 [local artist; Maria Cooke hand wove a Swan to be on permanent display at the Hospital]

Of course there was practical rooms around that central part of the ward; among which were the meds room, a clinic for GP-like appointments, and a staff office. The staff office looked out (with an entire wall of windows) onto the communal area. There are several reasons why this was a positive thing: firstly, in Bierley there was a back office, and only a window to the main staff office. This meant that if there weren't any staff out on the ward, and you couldn't see any in the main office, we would end up banging on the glass in a desperate - but admittedly, just sometimes rude and frustrated - way to get their attention. Secondly, it puts staff in a better position to observe service users; especially in their interactions with one another. Just like any group of people would be had they been thrown to live together without knowing one another or even having previously met; some of the service users on Bowling Ward clashed. As I said earlier; some things that might be deemed petty by outsiders can be hugely impactive to service users. Arguments would range from; "I was here first so I get to decide the TV channel!" to "because you were kicking off, none of us got any support this afternoon!" A lot of the time things might have been resolved, prevented or controlled, had staff been able to see the interaction/situation unfolding.
The part of the Hospital that I found the most... impressive? No... Surprising? - were the 'transitional living units' in Ariel Court. From what I gathered, this is a service that is designed to cater to individuals who have had a long stay on one of the other wards; and is just about ready to be discharged into the community. Ariel Court, are the stepping stone. A place to allow the individuals to gain more skills for independent living, and to provide staff the opportunity to feel reassured in that person's discharge by providing an independent-ish environment; whilst still within a controlled setting.
The units were one large living space and a bathroom. In the main space there was a living room area with an armchair, TV and side table, and then beyond a small wall partition there was a kitchenette with a single person table and chair, washing machine, dishwasher, fridge, sink, microwave, stove, kettle, toaster, and cupboards/storage space. The en-suite bathroom was still simple with the same design as those in the ward bedrooms. Then, using one outside wall of the bathroom and a chest-high green wall partition, the was 'bedroom' was sectioned off from the rest of the unit. The bed seemed to be the same size as the others and had a bedside table and a large wardrobe/shelving/cupboard/storage space. There was also a whiteboard and pin board which is always helpful for pinning up cards, letters and photos etc., and to also then have a space to write a daily routine/schedule and appointment reminders etc.
My Mum used to send me cards full of funny newspaper or magazine clippings that I would stick to my walls and then I used my white board to write my therapy group timetable, and a positive, empowering quote that I could look at every day. 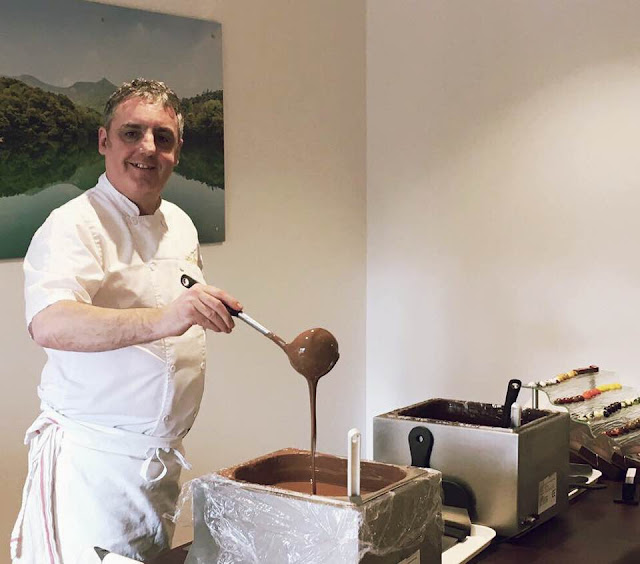 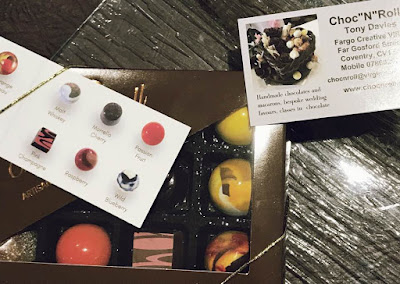 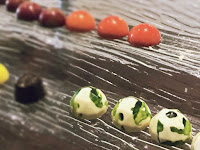 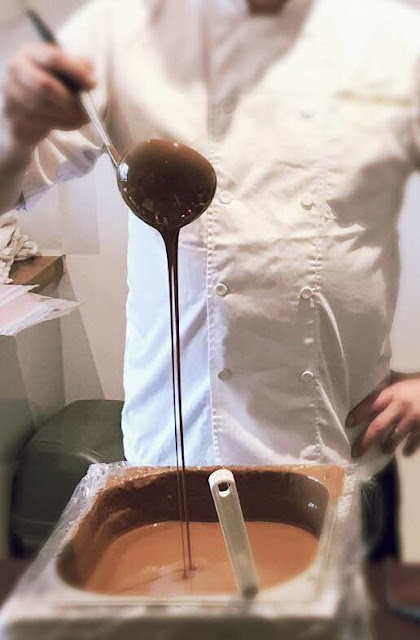 When the tour group (we'd picked up a few important Managers and Nurses along the way!) walked into - what staff were calling - a flatlet, the immediate, and probably reasonable response was "wow!", "woah!", "this is nicer than my home!", and "it's bigger than my Uni dorm!"
During the beginnings of the tour Raf and I would be asking questions and it wasn't that we were met by 'hostility...' But it's like in any situation where you've made a decision and others come along and question aspects of it that you may not have considered, or are unsure about. It'd be natural to become defensive. And after a very long "but-what-if-this-happened...?"-"Then-we'd-do-this..." and "but-then-this-might-happen..." type of conversation; Raf said that he thought perhaps the staff and managers etc who we were quizzing, might only be thinking in terms of having Service Users admitted, but knowing the types of wards that these were meant to be, and having experienced being on Wards like that; Raf and I were looking at things from the perspective of a Service User who might have - as we both did - spent a number of weeks, months, years even; in these beds, on these wards,  in this hospital... And so, with this in mind, after the initial 'wow' reaction; I asked whether staff had considered the possibility (and, in my opinion, high probability) of Service Users becoming institutionalised and reluctant to leave the Hospital once on Ariel Court. I explained that having such a lovely-? High quality-? - Living space, and little responsibilities in the way of bills, rent, and food (discussed next); might be appealing and cause Service Users less motivation to be discharged from Hospital and live in the community.
During the chat, I voiced my confusion over whether the Hospital still supplied the Service Users of Ariel Court with food/meals. I'm still unsure of what was said and what the actual answers were (if anyone reading this has the answers in full then please email me at aimeewilson@live.co.uk and I'll amend this!) but I'm sure it was said that the fridges would be 'full stocked' and that it is the 'Hospitals job to provide meals.' I think that's where my confusion came in because I couldn't understand why there'd need to be an entire hob in each flat let (acknowledged as a huge fire risk). But staff explained that aspects like that would be altered, where appropriate, for each individual; and that most - if not all - would be attending sessions with the OT department to improve their cooking skills and/or their ability to put together a meal. 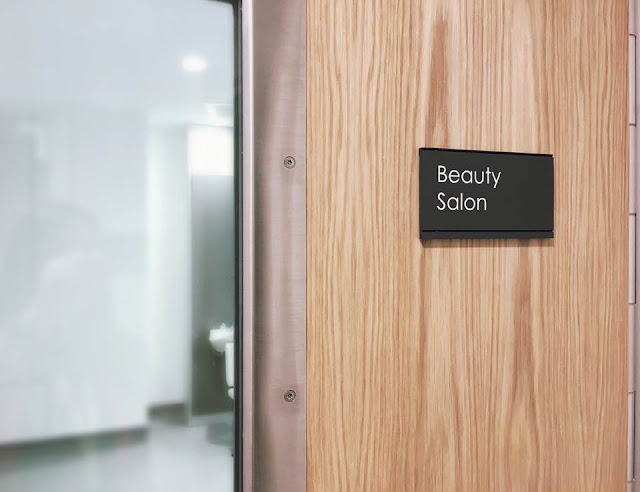 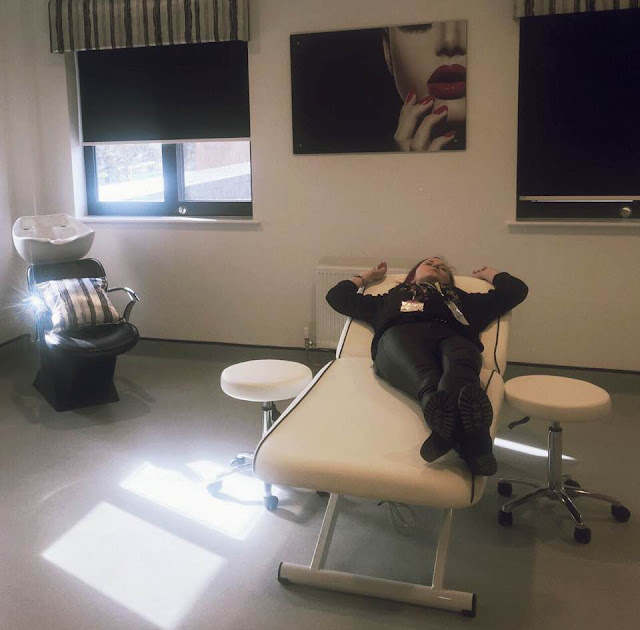 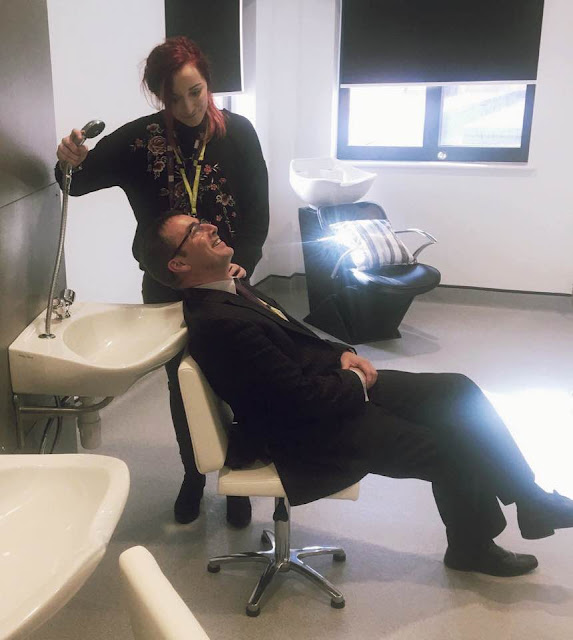 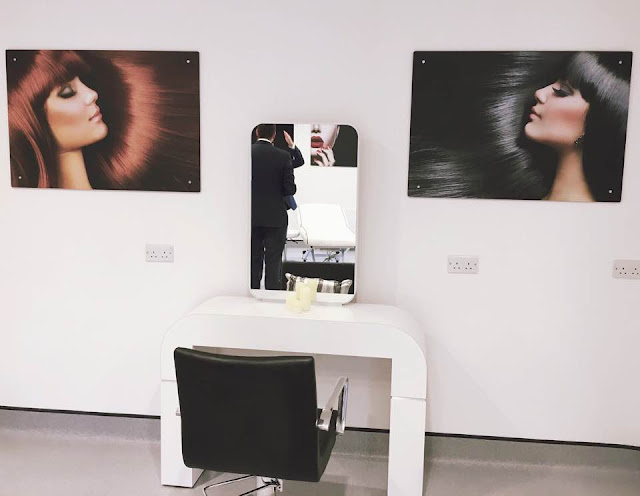 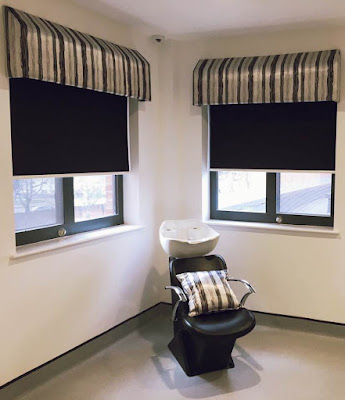 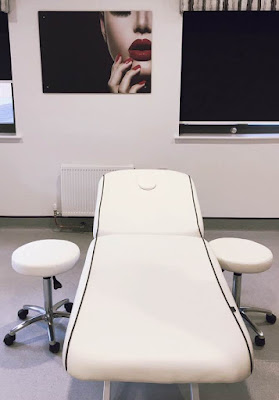 Ultimately, I admitted that had pets been allowed at the individual bungalow I lived in for three months in my step-down from Cygnet Bierley to the community, then I would've been in a lot less rush to leave.
A member of staff said (to my point that Coventry Ariel Court service users may be reluctant to leave) "but they'd still be living in a Hospital!"
In the first five seconds following this, I felt exasperated. I stopped myself from saying "that still doesn't matter sometimes!" And then I felt sad. Sad that I understood that feeling...
The feeling of walking along... 'a Tightrope of Recovery!'
Sometimes you'll lose your balance; and when you do, you can either:
1. let yourself fall knowing that there's a safety net to break your fall
Or
2. try to regain your balance

At the end of the day though, if someone were to experience that feeling, then the best place for them to do so is at Cygnet; the service who put a huge emphasis on equality and inclusion, whilst also supporting Service User's as individuals and taking into account personal needs of both physical and mental wellbeing. 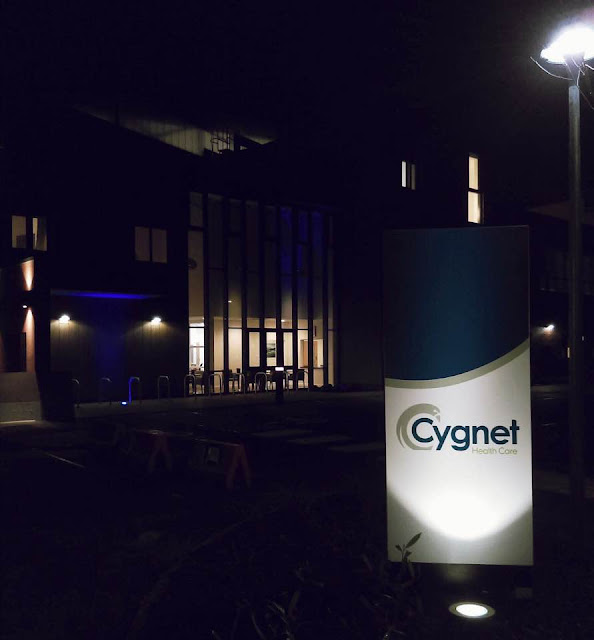