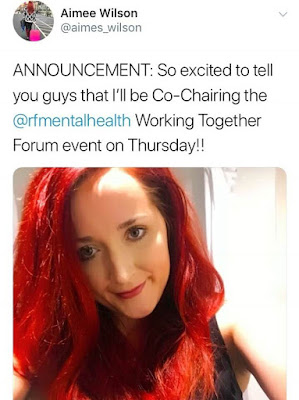 Not too long ago the Manager of my local Richmond Fellowship got in touch with me and asked if I’d like to Chair the upcoming WorkingTogether Forum. Having co-chaired the previous one, I was confident with the idea and agreed. They then told me that I’d again be co-chairing but when it came to the day the co-chair got ‘stage fright’ and I was left to chair the entire event! In addition to this, two days before the event, a group delivering one of the four workshops dropped out and I offered to help run the stand-in workshop which, we basically invented in 48 hours! So, I had many roles in this event and yes, it was stressful; but it was a nice-productive-lots-of-responsibilities-kind-of stress! 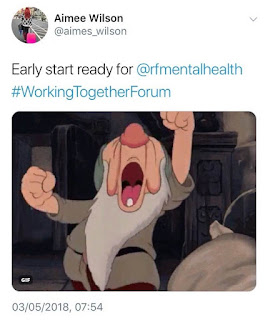 First order of the day was the boring, old housekeeping that I had to do!

And then we had a welcome speech from Stephanie De La Haye, Richmond Fellowship Board Member. And the speakers began with Plenary Speaker - Karen Machin, a Mental Health Survivor Researcher. Karen discussed her acceptance that sharing stories of recovery was very important in confronting stigma and discrimination (she’d worked a lot with Time To Change) but acknowledged 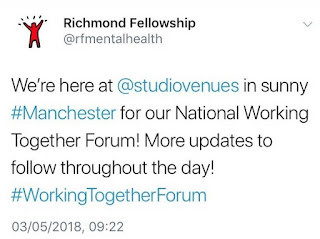 that it can make a person vulnerable and open to competitiveness. This was something I’ve encountered a number of times, both personally and through others – hearing another’s recovery story and thinking that he or she is worse off than you. And it can quickly become about how many times someone self-harmed or how many times they were sectioned… She spoke about the importance of considering your audience from a confidentiality perspective when sharing your recovery story and how essential it is to decide what you actually want to share about your journey. I shared with the room my experience in interviewing with ITV Tyne Tees and how I struggled during my interview because the reporter was trying to persuade me to share details of my abuse that I wasn’t comfortable sharing and watching the interview back, I felt incredibly vulnerable when they played an old vlog of my experiencing a psychotic episode. Karen then talked about the difficulty in determining when your recovery journey actually begins and spot about her own feelings of failure when therapy sessions weren’t changing her mental health.

“I wouldn’t be here today without peer support… I think peer support is so essential”
The Plenary Speech was followed by an Update on Working Together Strategy with the wonderful Stephanie De La Haye, Richmond Fellowship Board Member… again! She spoke about the Working Together Committee being refreshing and making changes and improvements to services, real. Steph told us how the Working Together committee embodied co-production and anyone is welcome to attend the first workshop on May 14th (with future ones being all over the country). 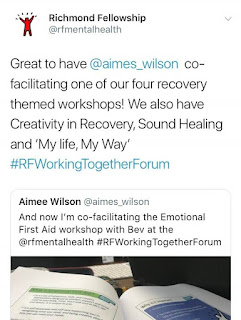 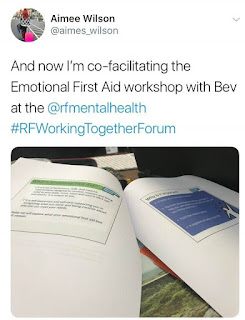 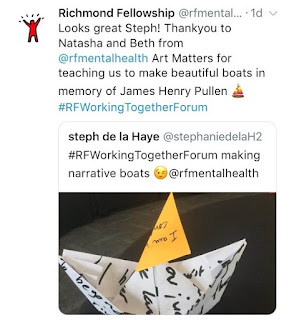 We then had four workshops running in unison, with people having chosen a workshop to attend on signing in at the beginning of the event. We had ‘ Creativity in Recovery’ which was ran by Beth Hopkins and Natasha Dovey, ‘Sound Healing’ which was ran by Craig Winterburn and Natalie Hewett and ‘My Life, My Way’ with Letitia Blakemore, Lorraine Bailey and Karen Bloor. The fourth workshop was ‘Emotional First Aid’; which I co-facilitated with Beverley Clay, Best Practice Manager, we had around twenty participants. I was quite overwhelmed because we were in a small-ish room and I’d been worried that no one would turn up so the realisation that the room was full was a little daunting! Luckily, this false confidence that I’d managed to learn for these situations kicked in and no one would have guessed how nervous I actually was! In our Icebreaker: ‘what made you want to join this course?’ We had a variety of answers that ranged from ‘the name of the workshop was catchy’ to ‘it made me realise that we have a First Aid Kit for physical injuries but not for mental health struggles. Our next question to the group was ‘what kind of things do you have in place to help you when things are difficult?’ We were met with: using DBT, writing a journal, using technology, keeping a mood diary, grounding techniques, and someone even talked about how their family have a ‘Happy Jar’ where they write down happy moments and activities and then when they’re feeling down, they can look back and be cheered up. The final activity was ‘what impacts emotional well-being?’ and most of the answers were around diet, walking, music, sleep, and food
After the workshops, came lunch! Which brought with it; some yummy food, and a hell of a lot of networking! I also had some exciting chats with some of the Richmond Fellowship Comms Team and the Chief Executive about future collaborations – watch this space! 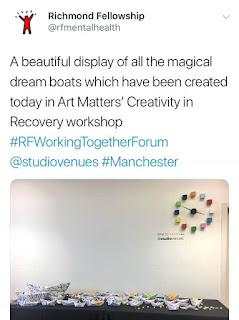 After lunch, came the ‘Client Portal Workshop’ which was for everyone to participate in and was led by Christina Hare, Nathan Clarke, and Lizi Baker. This workshop was… interesting! Ok, so basically, Richmond Fel 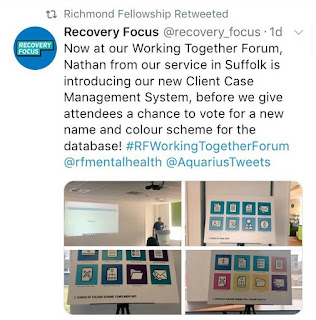 lowship are forming a new… database(?) in which service users (like me) can have more access to their notes and the records kept about them… I hope I’ve summed it up correctly! There was a lot of discussion during this workshop with people (namely me and another lady!) noticing problems that this pilot may face. There were just a few aspects of the idea that were concerning and anxiety provoking such as ‘what if your Support Worker has written things you aren’t happy with and it causes a confrontation?’ and ‘what about people who have no access to technology?’ Someone also questioned the possibility of the system being hacked and after it was met by a guffaw and ‘it’d take a really good hacker…’ from the developers, I pointed out that government and NHS data were constantly being hacked! The whole concept does actually sound superb! There’s just some concerns there…

Following this was a well-deserved break where I approached the developers after the workshop to make sure they knew that I didn’t mean to sound like I was nit-picking or that I was being… confrontational in any way. And that, if anything, I’d love to be a part of promoting the project once the kinks are worked out and the pilot begins later this year! Everyone was very understanding and explained that they needed a healthy discussion like what there’d been so that they could create the best service possible.
After the break, came the afternoon session of the same workshops from earlier in the day (affording people the opportunity to take part in two different ones in the one day). In the 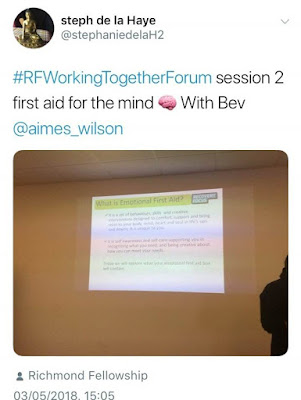 ‘Emotional First Aid’ workshop’s afternoon session; we had just five participants but I preferred it because it meant that we could actually get to know one another better and we had time to cover more content with the activities taking less time. Speaking of which, our first question ‘what made you join this workshop?’ was met with one, strong answer:

“On the way here, we were talking about suicide and someone was saying that there’s an organisation that offers suicide awareness training and I think that it’s something everyone should be aware and educated in. Even if you’re not directly in a career relating to mental health… because you never know what situation you’ll find yourself in.”
Our second question; ‘what do you think you have in place to help you when things are difficult?’ was answered with things ranging from ‘the NHS website(!)’, to ‘ensuring all of my self-care is done’, to ‘being creative’, and to ‘getting physical space.’ Our third question: ‘what impacts emotional wellbeing?’ was met with ‘diet, the weather, and it began a talk about the power of music. How playing an instrument can be a welcome distraction during difficult moments, that it allows you to find space mentally, makes you think differently (changes your mood), causes you to reflect on your mood and allows you to feel less alone when you hear lyrics that are talking about exactly how you feel. Since we had more time in the afternoon session, I was able to talk about the handout I designed that detailed how creative writing can be one of your Emotional First Aid tools. It was great to talk about something that I’m obviously so passionate about and to promote one of the key things that’s seen me into recovery and kept me there. Participants talked about their own experiences with creative writing and talked about how writing thoughts and feelings felt like a good way to get things out of their mind and feel like they were dealing with it. One person talked about how making lists helped him:
“And sometimes I’d look back and think ‘why did I even write that?’ It’s not that important; I don’t need to be stressing over that!”
Others talked about keeping mood diaries and I spoke about my blog and how it’d been such a great release and safe space for me to rant about things that were happening on the ward when I first started blogging.
After the afternoon workshops, we had one final speech; a ‘Personal Recovery Story’ from Angela Banks. She talked about her journey through depression and how it had gone from self-harm to suicidal, as well as her struggles with feelings of self-worth and her self-esteem. Angela finished by thanking both her family, and Richmond Fellowship for all of their help and support. Needless to say, it was all very emotional!
To continue the emotion; we finished off the day with a certificate presentation by Richmond Fellowship Chief Executive, Derek Carren. For such a ‘big wig’ he actually one of the most genuine, and grounded people I’ve ever had the pleasure of meeting – and speaking to! And I’m not just saying that because he gave me a certificate!

I left the event feeling completely and utterly drained but was flying high on the positive feedback and compliments about my work throughout the day! Richmond Fellowship, although they’re an organisation I see the most obvious are one that I scarcely get to work with and the teamwork and camaraderie that I witnessed and experienced has me eager to continue collaborating and begin some exciting talks about future partnerships together! So stay tuned for that! 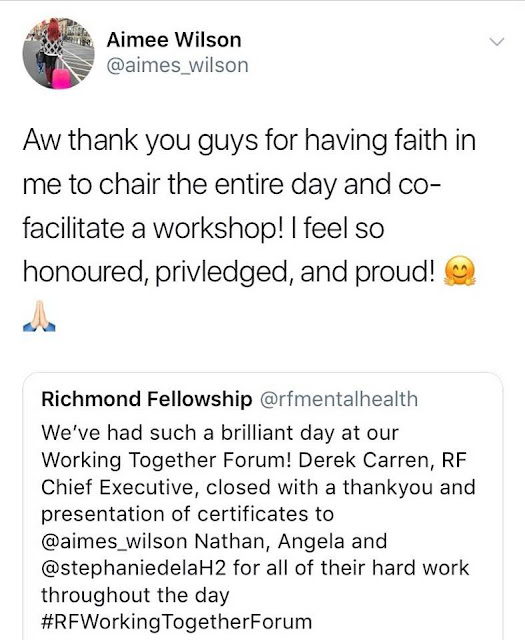 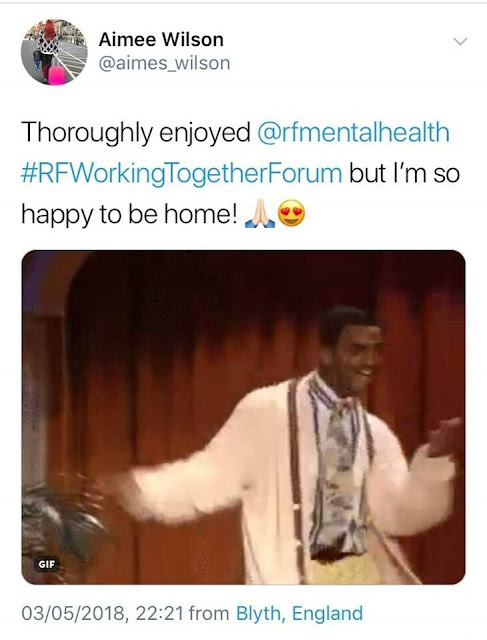