MY LIFE IN NINE iZOMBIE QUOTES 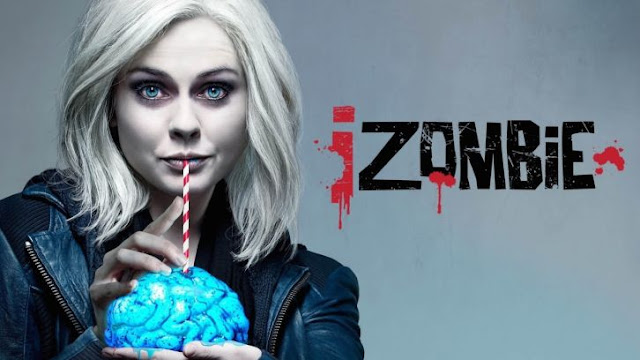 So, last year, I was facilitating a course in ‘Recovery Through Blogging’ at the local Recovery College and the ice breaker for the group was to talk about your favourite movie or TV show. The entire class had told us their favourite movie and then we got to one girl and she said ‘I’m going to be a bit different then and talk about my favourite TV show from Netflix.’ When she said iZombie was from Netflix, I got interested; having just signed up to the incredible service myself, I’d been in search of new shows and movies. She told us that the show was about a girl who was a Zombie but she solved the murders of the people’s brains she ate. I’m into gory things like that so when I got home I added it to ‘My List’ on Netflix and ended up forgetting about it for a couple of months or so. When I finally watched it, it was one of those shows were it takes a couple of episodes to really get invested in the characters but after that, I was hooked! I recently just re-watched the entire series for the fourth time (there’s four series with about twenty episodes per season) and wondered how I could spread the word about this incredible show…


1.     “But what if there is hope? Even if it’s dim and somewhere in the nebulous future. It’s a hope I need in order to survive”

I’ve just filmed for a project with Northumberland, Tyne and Wear NHS FoundationTrust and we talked a lot about hope and the importance of it in mental health. I think that one of the hardest feelings to cope with is hopelessness. It’s probably one of the most dangerous too because feeling hopeless usually comes alongside depression and both can be a catalyst for becoming suicidal. Feeling like there’s no point in life and that you aren’t ever going to feel better – or even feel the same as you used to – is horrific. It almost makes you feel worthless; like having no hope in life means that you don’t deserve it. And when you find even the smallest glimmer of hope, it is essential that you grasp it with both hands and use it as a springboard into recovery.


When my blog took off and I began receiving messages from readers saying how much it had helped them, I felt like I’d found – and I know this sounds corny - my calling in life. I suddenly felt clarity; like I finally understood why I’d been put on this earth and it wasn’t - as I’d believed for three years - to kill myself. That in fact, I’d been put here to go through all that I had and to come out the other side and use my experiences to help others. I was born to blog!


3.     “That’s the thing about pain isn’t it? Really feeling it doesn’t make it stop. It just shows you you’re still alive.”


I guess that reading this quote, it’s inevitable that I’m about to talk about self-harm but actually, I want to talk about emotional pain because the two are linked. Or at least, they are for me! When I was in pain emotionally, I felt like I had to cause the physical pain so that I could show someone exactly how bad I was feeling. And when I felt empty and like a part of me was missing, I would self-harm to see the blood that showed me there was something inside of me. That I wasn’t made up of just bad memories and hallucinations.


Being in recovery, I thought that things would constantly be positive and when I first learnt that actually, recovery is a whole new journey of ups and downs, I struggled to accept it. I wanted a break from the negative emotions, thoughts, and feelings; I felt like I’d worked so hard to deserve that and now my efforts had been in vain. Accepting these facts about recovery ended up being another step further into it and I found a passion for life that I’d never know possible. That I’d never known existed.


5.     “And what advice would you give yourself… Would you even take it? How about trying to live in the moment for once? Being grateful for the simple pleasures. You don’t need to know why you feel good. Just enjoy the ride.”


One of the key skills I learnt in Dialectical Behaviour Therapy (DBT) was mindfulness. All of the staff (shout out to my ex-Key Nurse, Debbie!!) from the hospital that taught me DBT would laugh at the fact I now use it, and promote it to others because at first, I was sceptical. I felt like ‘if I allow myself to be in the moment then it’ll end badly.’ I’d spent so many years trying to avoid the present, that finally succumbing to it, was difficult to accept. But it was also so important in my recovery because it allowed me the chance to properly enjoy the positive and exciting opportunities that have come with my blog’s popularity. I remember when I threw a party after reaching 100,000 readers and I was on the dance floor with two of my best-friends and one of my favourite songs was playing and I just stretched out my arms and looked to the ceiling and closed my eyes. And over a year later and I still remember that feeling it gave me.


6.     “Our lives are a collection of choices… We make our own beds. Seems beneath our dignity to whine when we’re forced to sleep in them.”


An important part in my recovery was learning to accept responsibility for my actions. It’s very tricky when you feel like they aren’t truly your actions, rather you’re reacting to situations. I would overdose and self-harm because my auditory hallucinations were telling me to. I’d try to take my own life because the memories of my abuse became so overwhelming. How was I meant to accept the consequences when I felt like I’d had no choice in my actions?


7.     “You spend your life in a comfortable dream state believing in destiny. Then reality snaps you awake like a kick in the teeth. Bad things happen as often as good things.”


I spent my childhood wrapped in cotton wool. And don’t get me wrong, I’m not complaining! In fact, I think it was the perfect way to grow up – to get to actually be a child in this day and age is a rarity. It did mean, however, that when I came face to face with online bullying and then the abuse; it was an absolute shock to the system and perhaps if I’d had a different upbringing it wouldn’t have been so overwhelming. But I think it was important that I had that time in my life to be naïve and to think that the world is a rosy, happy place because it meant that when bad things started to happen, the resilience I’ve had to build is incredibly powerful and strong.
8.     “It was all about finding my motivation.”


I’ve been doing a lot of media pieces recently for various TV channels and radio shows and one of the questions that everyone has asked me is ‘what was the motivation behind your recovery?’ I think it took two things: the first came after I ran away from Hospital. The Police found me in the next city from that which the Hospital was in, and by the time they’d tracked me down I had already taken an overdose. I ended up on life support for a couple of days and when I regained consciousness, I was taken to the Psychiatric Intensive Care Unit and was surrounded by some extremely poorly people. My second motivation came with the success of I’m NOT Disordered. Being offered some incredible opportunities and receiving invites to huge events was a motivation to get myself to a point in my mental health where I can fulfil all of these. I developed the attitude that after being in Hospital for two and a half years, I had to say yes to everything! Make up for lost time.


When I first began hearing voices, I thought I was ‘going crazy.’ I didn’t, for one minute, imagine that I’d spend the next nine years battling with their demands. Listening to a voice (and eventually three voices) is so, completely exhausting. You think that your head is somewhere you can retreat to when things seem rough and dire but when you’re experiencing auditory hallucinations like mine… well that safe haven just vanishes and all of a sudden you are so desperate to escape your head that dying doesn’t seem like such a bad idea. Occasionally, hallucinations can be one of those aspects of mental health where, over time, it gets easier to cope with and you almost get used to it. Other times, it’s something that the longer you experience it for, the most hopeless you feel. You worry that nothing is going to change, things will never get better, and you’re going to have to live like this forever. I think it all depends on the individual and how they experience their hallucinations.
Labels: achievement, blogger, BPD, changes, coping, experience, happiness, information, iZombie, mental health, Netflix, opportunity, passion, quotes, recovery, relationships, technology
SHARE:
Newer Post Older Post
Home