WHY I SPEAK UP ABOUT RAPE AND ABUSE 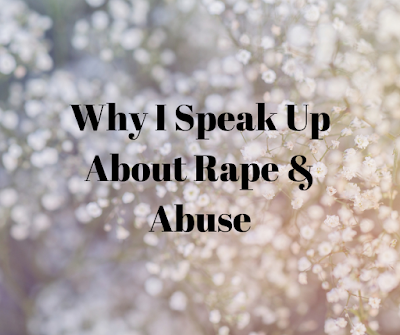 I wanna sing, I wanna shout.
I wanna scream till the words dry out.
So put it in all of the papers, I'm not afraid.
They can read all about it, read all about it, oh.
Nothing to hide
Stife and I smother
Suffered and cried
Strife made me tougher
Emeli Sande – Read All About It


I hope that there are some people out there who’ll read that title and say; ‘why shouldn’t she speak up?’ but I’m more confident that there’s people saying ‘yes, why the hell do you talk about it?!’

When the abuse started in 2006, I couldn’t – for one second – imagine telling over half a million people about it; I couldn’t imagine even telling one person! In the very early days, I didn’t even recognize that what he was doing was wrong; I only knew that it felt wrong and the absence of sex education and media stories about abuse and rape, meant that I didn’t even know what it was called. I hadn’t heard those words before; I didn’t know what they meant. I didn’t know that what he was doing to me had a name and because of that, I didn’t know that I wasn’t the only person in the world being hurt in this way. Of course, all of these things would have changed if I’d just taken the chance and spoke up.

His promises that no one would believe me and my own worry that if people did believe me, they would think I’d deserved it, made me completely reluctant to tell anyone what was happening though. I was already having suicidal thoughts about jumping from a building or overdosing and I knew that if I told someone and one of those possibilities happened then it would be enough to just tip me over the edge and solidify my belief that dying would be the only escape from the abuse. I’d lost all sight of how telling someone could do any positive or good at all. I couldn’t imagine anyone believing me and so I couldn’t imagine anyone being able to make it stop.

After a few months with hallucinations, on my second suicide attempt I was sectioned under the Mental Health Act and admitted to a Psychiatric Intensive Care Unit (PICU) where I met a lady whose self-harm meant she had two huge bandages on each arm. She told me that she’d gotten poorly after being abused by a family member and it was like all of a sudden, a light switched on and the vault inside of me opened up. The hinge was stiff, and it took a lot of effort, but it had opened and everything that had been crammed inside of it was spilling out and I told her what had happened to me. I told it in a rush. I told it so fast that it was like I was running out of air. I got so dizzy with how fast I spoke that I was grateful we were sitting down. I’m not going to lie; it didn’t feel like ‘a weight had been lifted’ or like I was finally ‘free’ – it felt like the start of a whole new chapter of my life; yet without finishing the previous one. It was like I was in limbo; I didn’t feel that I’d accomplished anything in telling someone about the abuse and yet I knew that doing so meant everything was going to change. This lady convinced me that telling the ward staff would be a good idea and the next thing I knew I was sitting in the ‘chill room’ with the Ward Manager and she was telling me that she now had to tell the Police and my Mum – and in that order. I didn’t want her to do either of those things, but she explained that she had a ‘duty of care’ and suddenly, that phrase became the most overused sentence for the next ten years of my life!

Speaking about the abuse and rape in my video interview with the Police was probably the most triggering trauma-related conversation I’ve ever had. With the amount of detail, I had to go into, it felt like I was reliving the entirety of the six months of abuse in one, very long interview with a complete stranger. It quickly became apparent that my memories were fragmented; and I mean to the point that I began to question their power – why should such inadequate memories have the potential to destroy my life? And I say inadequate because they really weren’t helpful in recounting the abuse and I actually worried that it would be the downfall of the case, that it’d be the reason I wasn’t believed. But the Police – to their absolute credit – appreciated disassociation and actually understood why it meant that I couldn’t recall any ‘memorable features’ that would prove I’d ‘seen something inappropriate.’ I think that if his prediction that no one would believe me turned out to be true that I probably would’ve never spoken another word about it. So, when the Police Officer told me: ‘we 100% believe you; it’s just frustrating because CPS don’t think we’ll get a conviction’ – whilst being disheartened – I wasn’t thrown off the idea of speaking out about what had happened to me. Their response made me feel good about talking about it; it didn’t make the horrific video interview worthwhile(!), but it did comfort me knowing that he was wrong because I had been believed.

I realize I’ve been very fortunate in this experience in that too many times people aren’t believed or taken seriously (just one reason why the conviction rates of these crimes are so low) but it did leave me wondering exactly what the point was in talking about it… How much good could it possibly do if it wasn’t good enough to see him be punished for what he had done? What else could I gain from talking about the worst thing in my life?

That’s when the reassurances from the mental health professionals started to kick in; I was flooded by Psychologists, Psychiatrists, Community Psychiatric Nurses, Social Workers, Support Workers… everyone(!) was telling me that talking about the abuse would help me get better. As though it’d magically stop me from feeling suicidal and would make the hallucinations go away! After two years, I think their constant barrage of assurances began to wear me down and I finally opened up to a Psychologist. Looking back, I don’t think it’s a coincidence that I had my most stable period of mental health whilst I went to my appointments with her. I also don’t think it’s a coincidence that after five months of talking about it, I ended up attempting suicide again and wound up on life support in Intensive Care. I think that talking about it so intensely got incredibly overwhelming for my mind and it made me realize that the memories were never going to go away because nobody could change what had already happened – it couldn’t be taken back and I could never forget about it. I lost the point in bearing my soul when I couldn’t see myself getting anything in return.

After Intensive Care, I was sectioned and admitted to Cygnet Hospital Bierley where I literally had the option of talking taken away from me; I was left with no choice - there aren’t many places to hide in a secure psychiatric hospital! This time, though, I was having Trauma Therapy with a Psychologist alongside Dialectical Behaviour Therapy so that whilst I bared my soul, I was taught coping strategies to help me deal with the thoughts and feelings that Trauma Therapy brought to the surface. Learning these new coping skills, I decided to begin I’m NOT Disordered and talk about rape and abuse on a public platform. Initially, I blogged for myself because I found it helpful to have an outlet for the things that came into my head in between Therapy sessions. When friends and family began reading it, I took on the mindset that being open about my experiences might help those closest to me understand my attitude and behaviours better and therefore be better placed to support me. I had to modify this thought process when the audience began to grow. With the growth came the idea that talking publicly about rape and abuse might help others to understand it, enable others to become better placed to support people they know through it, and encourage readers to speak up about their own experiences. This encouragement made me worry a little bit that writing so openly about what had happened to me could make for some very upsetting reading for my friends and family but I realized that I had to be able to talk about these things and even though it might occasionally make for upsetting reading for them… it happened. These things happened… to me.

I hope that this post instills the courage in at least one person to speak up about abuse or rape and I hope that people will have a better idea of what kind of response that person might need.