“JUST BECAUSE YOU’VE SAID YOU FEEL SUICIDAL, IT DOESN’T MEAN YOU HAVE TO ACT ON IT” | HOW IT REALLY FEELS, MY ATTEMPTS, & THE STIGMA | SUICIDE PREVENTION DAY 2019 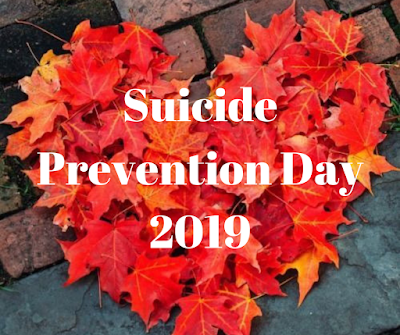 “I didn't want to wake up. I was having a much better time asleep. And that's really sad. It was almost like a reverse nightmare, like when you wake up from a nightmare, you're so relieved. I woke up into a nightmare.”
― Ned Vizzini, It's Kind of a Funny Story


I umm’d and ahhh’d about doing this post today for two reasons; 1. I wrote a very similar post in December 2018 and didn’t want to repeat it, but I also recognize that there’ll have been a lot of new readers since then who may not have scrolled that far back. And 2. I once wrote a post (I think I ended up deleting it) for this day when I first began blogging and talked about the two attempts I’d made and had a comment from a reader saying ‘good luck with the third,’ but I’d like to think that the world has come so far with such spiteful comments around mental health. After rethinking my reluctance around the post, I decided that not producing content for this hugely momentous day (especially in the mental health industry) would almost be dishonest! Suicide has been such a huge part of my life that I thought it would be demeaning to not shed some light on the subject and of course – as always – I recognize how many people come to my blog for inspiration and I realize that I’m almost… setting an example? So, for me to not talk about suicide has the potential to encourage others also not to speak up about it; and that’s definitely not something I want to happen!


When I was recently in Hospital being detained by Police under the Mental Capacity Act, one of the Officers said something I’ve heard many times before “if you really wanted to kill yourself, you’d just do it!” Whenever this is said to me, I’m immediately on the defensive; arguing that just because I chose to commit suicide in a particular way, it didn’t mean I was any more or less suicidal than someone who chooses a different ‘method.’ I also pointed out that I’m always honest and don’t pretend that I’m suicidal with every single overdose; even though that must be hard for some people to understand because I think that the natural assumption when you hear someone has overdosed is that it was a suicide attempt. For me, though, it mostly became a way of self-harming and silencing the auditory hallucinations when they would tell me to do it.


This has meant that from the sixty plus overdoses that my records state I’ve taken, around three of them were actually suicide attempts. The first, was my first overdose when – after hallucinating for ten days – I decided to down a bottle of pills rather than asking for help and telling someone what I was experiencing. The second and third attempts saw me end up in Intensive Care on life support because I was deemed not to have the capacity to be able to refuse treatment for the overdoses. The second time, I remember an Anesthetist saying that I had one last chance to co-operate and warned me that if I refused I was going to be sedated and the last thing I said before I fell unconscious was ‘I hope something goes wrong and I die anyway!’ The third time, I was so desperate and determined to avoid the life-saving treatment that I used my toes (the only part of me that wasn’t being restrained) to pull out the drips and tubes that were administering the medication.


There’s a quote somewhere that says when someone is suicidal, they don’t want to die; they just want the pain to stop but I think that the two are linked and wanting a pain-free existence can be a rationale for wanting to die. It definitely was one of mine. At times - when I would overdose - it was because I was so desperate to escape the volume of the hallucinations and other times, it was to be free from the horrific memories of the abuse. When I was suicidal, it would be both!


Believe it or not but I grew up terrified of the thought of dying! I imagined it to be blackness but that your mind lived on and was aware of the nothingness that surrounded you. Then two Hospitals accidentally overdosed me on morphine and I went into respiratory arrest (stopped breathing) and I just remember my entire vision being bright white and right in the center was the brightest part and I had this instinct - this feeling, that I had to get to it. The experience ended my fear of death and when bad things kept happening, I started to see death as a relief; a way to end the suffering and go to a better place. I think that even with the abuse in mind, this was probably the most dangerous experience I went through, because alleviating that fear bolstered me up when I was questioning my decision to attempt suicide.


And there’s something else about suicide; know that just because you’ve said you feel suicidal, it doesn’t mean you have to act on it. It took me a long time to learn this because I used to think that you couldn’t be suicidal without doing something about it and I thought that once I told someone that’s how I felt, if I then didn’t do something, it would like as though I were lying. I worried that people would no longer take me seriously if I didn’t ‘follow through’ and that if I were to say I felt that way again then professionals would question how genuine it was and this made asking for help really hard and I never felt that I could call a professional before overdosing. This thought process, was recently reinforced when I called the Crisis Team and was told that because I’d said I was safe, no one would come and see me! It’s like you can’t win with suicide. You either attempt it and are given stick for not asking for help first, or you ask for help but are told that you aren’t at a high enough risk to be given it.


Another thing that prevented me from asking for help was the general stigma around suicide and the idea that people sometimes deem it attention-seeking or the ‘easy way out.’ The whole thing about suicide being for weak people really angers me because to me, it takes a hell of a lot to go against the natural human instinct of survival and attempt to take your own life. That doesn’t make it ‘brave’… just… that it takes a hell of a lot of energy!


I toyed with the idea of finishing this post with tips or advice on alternative things to do when you feel suicidal, but I worried it’d be demeaning and patronizing. As someone who has truly experienced feeling suicidal, I know that in that moment it feels like the only thing you can do to help yourself is die. Telling you to try reading a book, having a relaxing bath or do some mindful coloring-in just seems to make the entire feeling of being suicidal trivial and seem as though it’s easy to not pay it any attention. And it isn’t. You can’t replace thoughts of ending your life with crayons and baths! So instead, my advice is to talk. Just talk. To your GP, to a friend, to your family, a Nurse, a Counsellor, even a complete stranger on a helpline… literally anyone! Make someone aware of what you’re thinking and how you’re feeling. I know it isn’t easy because in your darkest moments the worry is that telling someone will mean that they’ll stop you from fulfilling your thoughts to hurt yourself and do you know what? That’s probably true – where possible the other person should always try and save your life – duty of care, being a decent human being, and all that jazz! The greatest coping skill I’ve learnt over the years has been the delay tactic. If I’m having thoughts of suicide then rather than acting immediately, I tell myself that if I still feel the same in an hour’s time, I’ll do it. I find that it works well – for me, at least – because I’m so convinced that things won’t have changed that I can manage delaying things for an hour or two. And when I end up feeling better – or at least no longer suicidal – well, I never regret not overdosing or self-harming.
Labels: advice, coping, help, mental health, overdose, self-harm, stigma, struggling, suicidal, suicide
SHARE:
Newer Post Older Post
Home