THE ART OF DECISION MAKING IN MENTAL HEALTH 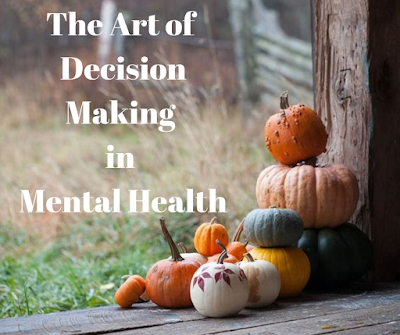 “The human life is made up of choices. Yes or no. In or out. Up or down. And then there are the choices that matter; to love or hate. To be a hero or to be a coward. To fight or to give in. To live or die.”

I was recently at a meeting with Richmond Fellowship at their Head Office and someone talked about how they’d heard a comment somewhere that it actually only takes five seconds to make a decision. That you can spend hours mulling it over and considering the pros and cons; but really, it takes just five seconds to finally decide on something. I found this idea really interesting and so it has inspired this blog post…

It got me thinking about how there are so many decisions in mental health that can be life-changing and – potentially – lifesaving; it all depends on who it is that’s making the decision and the situation they’re in when they’re having to do so. Mental health can be a minefield at the best of times; but when it comes to a dilemma and a decision-making situation? One of my pet peeves is when someone says ‘if I was you…’ because you really don’t know what you’d do until you’re in the situation. You can believe that you have ethics and morals, but you could end up in a position where they’re challenged and leave you questioning their strength.


My Mum always says that once I’m going to self-harm or attempt suicide it’s as though I have tunnel vision and no matter how much help and support is offered to me, it won’t make a difference because my mind is made up; I’m going to do what I’m going to do. I really saw this when my Mum asked what I would do if I was on my way out to overdose and she took poorly. I told her I’d ring an ambulance and leave anyway. If you know me, then you’ll know that’s not me. I’m not that kind of person. I love my Mum more than anything in this world so for me to say something like that… I mean, I’m all for taking responsibility for your actions but I think that looking back on it… well, I must’ve been really poorly.


When my mental health first deteriorated in 2009 until my hospitalization in 2012, I didn’t often ‘ummm and ahhh’ about self-harm; once the auditory hallucinations had commanded me to do it, I didn’t feel that I had much choice in the matter. There was no decision. People would say to me ‘why didn’t you try doing this?’ or ‘why didn’t you do that?’ because they didn’t realize that when the voices told me what to do; I had to do it. They didn’t seem to understand the strength and power that they had over me.


After learning healthy and safe Dialectical Behaviour Therapy (DBT) coping skills in hospital, I found the strength and determination to battle the hallucinations and contradict them in their commands to self-harm. Knowing these ways to cope and discovering that I wouldn’t die if I went against what they said, meant that I finally had the opportunity to make a decision on the matter. I could finally decide not to self-harm. Of course, this isn’t always the case; occasionally – usually when I’m not taking my medication and so the hallucinations are there – I do still choose to self-harm. I hate to phrase it like that but I’m all about being honest on I’m NOT Disordered and if I can say that I previously had no choice in the matter then I have to be fair in saying that I now – sometimes – do. I say sometimes because it’s like I said; the majority of any self-harm now comes when I’m not taking my medication and the hallucinations come back. There’s been some occasions though where something upsetting has happened and I’ve tried my DBT skills and they haven’t been good enough, so I’ve gone back to old coping techniques and self-harmed. On those occasions, the next decision has been whether to seek professional help; both medically and emotionally.


Before the hospital admission, for a small period of time, I was labelled an attention seeker by some professionals and do you know what? I totally understand why they would think that of me when I think of how I was. I mean, I would do as the voices commanded and self-harm, they’d go quiet and I didn’t want to die so I’d go and get help, then they’d get angry I had gone to Hospital or called the Crisis Team and I’d run off or refuse their help/treatment. To them, I was hurting myself, getting help for it, and then causing a massive drama and fuss by backtracking on my decision to tell someone what I’d done. They didn’t believe that I’d had any genuine motivation to self-harm in the first place because they thought that if I had done, then I wouldn’t get help for it. They didn’t understand. Sadly, it took me a long time to understand and find the ability to put it into words myself so there was no way that I could explain it to them. Reflecting on this though, I shouldn’t have had to. They should never have judged or labelled me in such a way, and in doing so, they added to my list of reasons not to get help when deciding whether to or not when I was struggling or after I had self-harmed.


The other motivation that stopped me from getting help and support was the thought of the decisions that the professionals could make. The - potentially - life-changing decisions they could make. And this is the other side of decisions in mental health; the ones that the Doctors, Nurses, Police, Paramedics, Crisis Team and so many others, make. There was one time when I had taken an overdose to silence the voices and once I’d done it the voices went quiet and without them, I didn’t want to die, so I took myself to A&E. They hadn’t been able to find a vein for the lifesaving IV antidote treatment and had decided that I needed a central line. I’d had one before, so I knew what it entailed, and I refused to have it. It took Doctors and Psychiatrists five hours to decide that I didn’t have the capacity to make that decision and a ton of Nurses and Healthcare Assistants and restrained me whilst an Anesthetist sedated me with Ketamine so that they could put the line in. The horrific hallucinations I had as a result of the Ketamine provided another reason not to get help in the future because I was so terrified that they’d do the same thing. Luckily, my Community Mental Health Team saw the danger this could bring, and we created an Advanced Directive which stated that if sedation was indicated then it not be by Ketamine. Whilst the Directive worked and it wasn’t used again, it didn’t stop people deciding that I didn’t have capacity on some occasions.


The Mental Capacity Act 2005 has become a huge part of my life on more than one occasion and after recently meeting a Psychiatrist who contradicted all the other Doctors who’d deemed me not to have capacity; I got thinking about the decisions that the professionals have to make. The difficult thing about capacity is that it’s usually judged on four key principles and that’s that the person can retain information, repeat it back to you, still make a decision with the information considered and be able to communicate that decision. This doesn’t allow for a person to always be considered as lacking capacity if they are suicidal. It doesn’t allow for a person to make the ‘wrong’ informed decision; for a person to retain the information that what they’ve done could kill them and yet still decide to continue down that path covered with suicidal thoughts and intent. I’ve had many professionals be so frustrated with the system that means even when I’m suicidal, I can occasionally still have capacity, that they’ve taken it out on me! I’ve overheard Doctors saying that they’re hitting their head against a brick wall because legally they have no power to detain me but ethically is a different story because they know that my life is in danger if they leave me to my own devices.


To link back to the quote at the beginning of this piece, there’s a part in Greys Anatomy where a Doctor makes the decision that a patient’s minimal brain activity means she won’t come out of the coma. The patient’s husband is upset because minimal doesn’t mean none and he calls the Doctor a murderer. I know it’s completely different, but it made me think about mental health related decisions and how a professional can make a decision as part of their job but actually, it’s about a Service User’s entire life. To all of the professionals who read I’m NOT Disordered; please remember that the next time you make a decision.