WHY APOLOGIZING IS SO ESSENTIAL IN MENTAL HEALTH 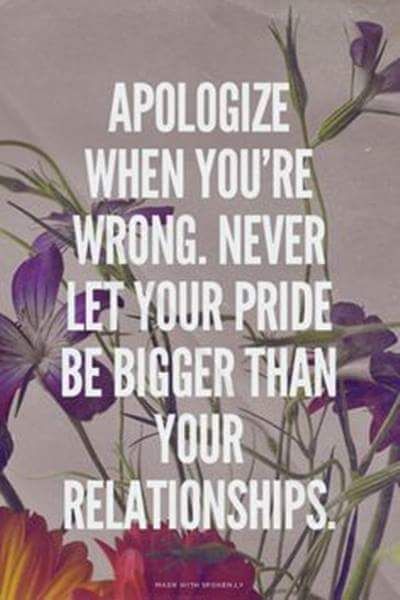 Like many things in mental health, there’s always a backstory to a person’s response to something. My appreciation of apologies is no exception…


“There’s nothing I can do but apologise.”


I was told by the Psychiatric Liaison Team that I’d be having a Mental Health Act assessment and when a Psychiatrist eventually showed up it was to tell me I could go home.


Being told you’re having a Mental Health Act assessment is – for me, at least – one of the worst things you can hear where your mental health is concerned. I think that if the Northumbria Police officers hadn’t been so supportive at that time, I would’ve completely ‘gone off on one’ and fought against this happening with all my being.
As it was, I talked through all the overwhelming thoughts and feelings and managed to get some relief in doing so. For the first time in a while, I felt like I didn’t have to show someone my emotions. I could just tell them. The situation was difficult though, because above everything, I wanted to go home but at the same time I felt like I’d been – almost – cheated out of having the opportunity to ensure that professionals really agreed that’s what should happen. If the Psychiatrist that eventually showed up to let me go home had at least spoken to me before making that decision I might have felt a whole lot better about it all. As it was, he took the Police officer from the room, told her I was going home and then told me I was. He didn’t bother to ask me if I still wanted to go home. He didn’t bother to check whether I was well enough. And so, the apology came off the back that the Psychiatric Liaison Team actually didn’t have the power to dictate whether a Mental Health Act assessment should take place.


“Just acknowledging they did something wrong is enough.”


I think that my appreciation for apologies comes from – like many things in my mental health - my trauma. The fact that the person who abused me was never prosecuted and has never apologized for turning my life upside down.


I’ve thought a lot about what it would mean if he did say sorry and I think that it might make all the difference. That might sound silly because an apology for something like he did to me could seem trivial and really, nothing compared to what he’s put me through but it’s not true. I think that it’s kind of the opposite… a simple apology would help because the… hugeness of what he has done to me could never be matched. With sexual abuse survivors, people talk a lot about forgiveness and what it would take to achieve that. Can anything ever, really, be good enough? Over time, I’ve learnt that there has to be. Something has to be good enough or how can you move on?


I think that the confusion comes in when people believe that accepting someone’s apology means you forgive them. And it doesn’t have to.


Perhaps some things really are unforgiveable?


The stage after deciding what it will take to help you move on, is figuring out how you’ll cope when – like many things in life - that doesn’t happen! Deciding what I needed from an apology was surprisingly easy, it was coming to terms with the fact that I probably never will get that apology that’s been the hardest of all. I’ve tried imagining the apology. Imagining what we’d say to one another if the opportunity/situation arose… I’ve even wrote stories about it. And it’s been very cathartic and therapeutic because whilst I can never truly know what he’d say if he were given the chance, I think I know - better than anyone - what it would be.

But I really do believe that if we saw one another again I don’t think I’d get that apology. I think he’d sooner deny the entire thing. To my face. Because he’s weak like that. For me, an apology would mean he not only acknowledged what he’d done was wrong but that he’d acknowledge that it’d actually happened.
Apologize to yourself first
I think that one of the hardest apologies comes when you recognize that actually, you need to apologize to yourself before you expect one from someone else. Apologize for not treating yourself in the way that you deserve rather than in the way that someone has made you think you deserve.
Newer Post Older Post Home