MY CURRENT FEELINGS ON THE ABUSE

Can you ever ‘accept’ abuse?

And what does it mean to have ‘accepted’ it? Does it make it ok?

I think that what the reader meant by ‘accept’ was how I’d moved on from it. How I’d come to be unstuck from the flashbacks and memories. 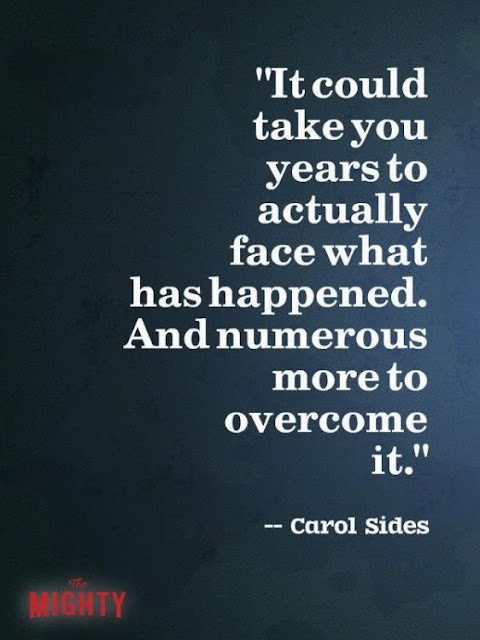 Being in ‘recovery’ is – I think – about being safe with your emotions. Having the power to resist any thoughts or urges to self-harm; because it’s not that you don’t have them anymore. It’s that they don’t control you. Your life. Your relationships with loved ones. Your hobbies and free-time. Your work. Your confidence. So, I think that becoming safe with my thoughts and feelings has had a huge impact on my ability to move on from the abuse because it’s allowed me the opportunity to feel all the emotions, I’d been either blocking out, or overwhelmed by, since it started in 2006. And over the years, I’ve learnt – with the help of professionals – that a lot of my hallucinations come from pent up thoughts and emotions. It’s almost as though my brain becomes so overwhelmed with all these secret feelings that it just breaks and that creates a hallucination! I think I’ve become safe with my emotions around the abuse because of two things; medication, and sheer hard work!

In experiencing these emotions I’ve been able to work through them; talking about each one, what it means, why it’s there, and the impact it has on me. Gaining some sort of understanding is something I have always found reassuring. Even in general things – not necessarily related to mental health – I like to know what it is, what it means, and why it happens. Learning and understanding is comforting because – for me – it shows that at least one other person has had the same/similar experience in order for it to be explained to me. Bit of a catch 22 here though; whilst it’s comforting that you’re not alone it’s also distressing to think of someone else going through what you have. To finally understand that my belief that I’d deserved the abuse had come from being told it was; and that actually, it was also a common worry in sexual abuse survivors, was so completely reassuring that I allowed myself to fully experience the feeling. This allowed me the opportunity to learn – again, with the help of professionals - how to control it and how to manage my safety during it. Admittedly, a largely helpful tool in me overcoming such thoughts and feelings was being sectioned and in a psychiatric hospital when the majority of this learning occurred; as it meant I was – mostly – safe from myself. I was without my usual means of self-harm and was therefore almost forced to cope in a different way. But I don’t want to attribute too much of my progress to being in hospital; after all, it’s only an environment change. And it happened to be the right environment for me. It doesn’t mean everyone should be hospitalized in order to work through such thoughts and feelings. Everyone is different and everyone learns differently. For some, being in Hospital can be countertherapeutic.

Another aspect of the abuse I’ve had to learn over the years since the abuse, has been accepting his reluctance to take responsibility for his actions. People often ask how him pleading guilty (he was arrested for the abuse) would change things because it wouldn’t change the fact it’d happened. But actually, a guilty plea would change everything! It’s taken me around nine years to learn how to accept responsibility for my actions so why should he be any different? When I began self-harming and taking overdoses I was very… stubborn? No! Arrogant, almost! That these were my actions and they didn’t include anyone else. I couldn’t see the pain and suffering it caused the people I love or the efforts and work it took from professionals to ‘save’ me. For nine years people have told me that I need to learn to accept the consequences of my actions and yet he doesn’t? How is that fair? So, you see, there are still aspects surrounding the abuse that I can’t make sense of and which, I think, I might never be able to ‘accept.’

I just think that the greatest difference between my attitudes towards the abuse from the years I was ‘poorly’ to these days where I’m in recovery, has been my safety. The memories of the abuse and the actual abuser no longer has that power over me. He doesn’t make me want to be dead anymore. If anything, it bolsters me on and gives me the energy and the courage to live.