“HOW CAN YOU BE SO HONEST ON SOCIAL MEDIA?” 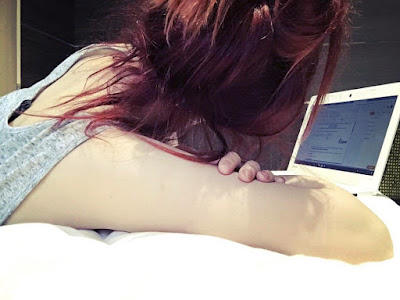 I was recently telling a neighbor about my latest post: ‘THE REALITY OF LIFE AFTER ABUSE | TW’ and describing what I’d talked about in it when she asked me that question; how could I be so honest so publicly? And it got me thinking… then one of my inspirations; Victoria from InTheFrow wrote a piece titled ‘The Problem with Social Media & The Removal of Instagram Likes’ and I was even more confident about writing a piece on my thoughts and rationale behind being honest and upfront on social media.


You know that whole saying about having ‘a weight lifted’ and ‘a problem shared is a problem halved’? I had no idea what that meant or felt like until I started blogging on, I’m NOT Disordered. From November 2006, I wasn’t being 100% honest until January 2013 when the blogging began. That includes the times when I first told someone about the abuse, when I reported it to the Police, and when I had to tell my Mum what had happened to me. Yes, I was telling them something I’d kept a secret, but I wasn’t honest about all of my thoughts and feelings surrounding the abuse. I guess that I was still warming to the idea of talking about what had happened to me and so talking in more detail and in more depth? Well the only reason that didn’t scare the hell out of me was because I didn’t consider it would ever happen. If we went back to that day I was being interviewed in the horrible, falsely home-y room at the Police Station, I could never have imagined that I would end up writing the posts that I write these days. Keeping a huge aspect of my life a secret and then talking about it only halfway…? Well I hadn’t realized what a weight it had been until it was lifted.


From my very first blog post, I vowed to be honest and open. Sometimes, the gravity of that has changed in that I’ve been open about thoughts of self-harm and then open about actually self-harming, but I’ve always been honest. When I talk about self-harm, I’m very aware that it can trigger – and sometimes even influence - others who are on the brink of also using it as a coping strategy so I try to remember to write a ‘TW’ (Trigger Warning) on posts that have the potential to do that. Some people might think that it’d be a whole lot easier if I just didn’t write such posts but – sadly – self-harm is a part of my life and without talking about it, a number of things wouldn’t happen:


1.      It wouldn’t raise awareness of this being a coping mechanism and the different forms it can present as


2.      It wouldn’t be challenging the stigma in attempting to make self-harm somewhat understandable


3.      It wouldn’t encourage others to speak about their self-harm, increasing their chances of getting help


4.      It wouldn’t give me the opportunity to have some kind of outlet for my thoughts and feelings around the topic


Another topic of my blog posts that has a similar impact is suicide and suicidal ideation. In giving my rationale for talking about these difficult, complicated, and intense subjects I don’t expect to be called – as some readers do – ‘brave;’ for confronting the stigma that promotes self-harm and suicide be something to be ashamed of. Something to be kept private. But privacy has a personal definition in that it means something different to each individual. Some people will draw a line at disclosing particular aspects of their life and that might be beyond the line that others would have drawn. This has been something I’ve found challenging when it’s regarding people I love. There has been something huge happen to someone massively important to me and I look on this thing as something that could be talked about because I see it as being helpful to others. But this person sees it as personal and is very guarded around it. I’ve learnt to respect this because I love and respect this person enormously. I’ve also adopted the thought process of treating others how you’d like to be treated and there are some things I would only tell some people and if those people were to talk to others about it, then I’d feel disrespected. And I would never wish that on anyone – not just this important person in my life.


Something this person has also taught me is that they’d worry that telling people about this huge thing might make people feel sympathy towards her and I guess this is true for my mental health too. I had someone once say to me that they ‘felt sorry’ for me and it was probably one of the most condescending comments. There’ll be some people who think that is unfair of me and that the person only meant well; which is sometimes true but, in that situation - believe me - it was condescending! I think I was mostly upset because it was actually a bit insulting to have people think that I write I’m NOT Disordered because I want sympathy for what I’ve been through because it’s so much more than that!


Discussing sympathy always leads to chatting about empathy… would it be wrong of me to say that that’s something I’d like readers to have as a result of my posts? I think that finding the ability to empathize after reading one of my blog posts is one of my biggest goals I aim for in writing them. I want for my writing to help people to understand, comprehend and appreciate all of the aspects of mental health that I blog about and I do this with the hope that helping people understand doesn’t come across as condescending in anyway. But mostly I hope that people will leave my blog with some comprehension of the power mental health can have over your life. I hope they finish reading a post and think ‘now I know how to better support someone I know who is struggling.’ Or realize there’s something they can identify with and will click off my blog feeling a whole lot less alone and a little bit more understood.


Feeling like I’m helping others in some way isn’t just my biggest motivation in blogging. It’s also about what I gain from writing these posts. The cathartic nature that writing brings to me means so much because it’s hugely positive for my mental health in that it provides me with the opportunity to release a lot of pent up thoughts and feelings. A main one recently, has – unfortunately – been anger. In fact, anger has probably been a pretty common theme throughout the six years that I’m NOT Disordered has been going for because it’s a bit of a common emotion in some people who have been abused. Overwhelming, uncontrollable anger isn’t an emotion that you can live with, so finding an outlet is extremely rewarding and reassuring. Blogging has become a welcome break from the searing hatred that I feel towards that man.


Another gain I get from blogging is all of the things it has taught me and all that it continues to teach me. From how to get my priorities in order, to why Greys Anatomy is my favourite show! It has also taught me that there are like-minded people out there who can understand some of the things I have experienced and who are having the same thought processes as me in terms of battling the stigma and being passionate about social media and the gains it brings.