Sunday, 18 August 2019
“Even the smallest ones can change the world” 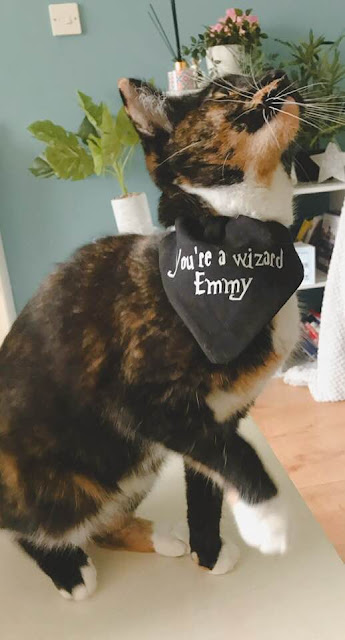 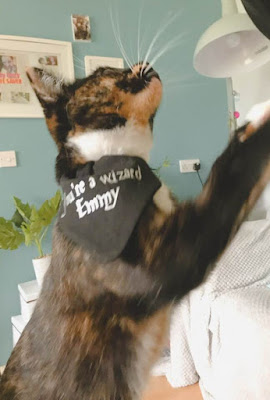 You don’t have had to have been reading I’m NOT Disordered very long to know that my mental health is greatly benefited by having my pets (a two-year-old bunny named Pixie and a one-year-old kitten named Emmy) because I regularly talk about them, promote the general notion of having pets, and have collaborated on a few pieces for Pets at Home, Cats Protection and Willows Cat Adoption Centre. And if you know this, then you’ll appreciate my happiness when I found an excuse to go into my local Pets at Home; the bow on Emmy’s collar was frayed but things got even better when I spotted some new collars and accessories! I’ve always wanted to dress up my pets, but I’ve been very skeptical that they’d tolerate anything so when I fell in love with the ‘So Meowgical’ bandana for cats, I figured it was the perfect opportunity to give it a go! And, much to my excitement, Emmy loved her trendy new neckerchief and - as I said to my Mum - “she ponced about in it like she was all proud of herself!” And of course, once I’d seen that she liked it, I went ahead to searched for cat bandanas on Etsy! I’ve never used Etsy before but the price on the personalized neckerchief, from Bandana Bowtique, that I picked out was so good that I figured it wouldn’t matter too much if the order didn’t work. But of course, it did, and after the neckerchief was delivered in a matter of days (despite it only being a £1 delivery charge) I messaged the seller to suggest a collaboration. And I’m very pleased to say that Bandana Bowtique have offered you all an exclusive 15% discount code to use on their Etsy shop  - all you have to do is type in IMNOTDISORDERED at the checkout!

This post wasn’t just inspired by the collaboration though; recently, a friend has had to make the all too familiar decision to have her cat put to sleep and it has inevitably triggered memories of losing my four-year-old cat Dolly last October. Luckily, my mental health is at the point where I can cope with these memories but another helpful aspect in coping with the triggers is having Emmy. Even though I still had Pixie, the house wasn’t a home without a cat in it. And having been raised with a cat, Pixie was lonely and constantly wanting attention and cuddles – which was sweet but also sad; so I visited Willows Cat Adoption Centre a week after Dolly was put to sleep and adopted Emmy – a rescue kitten (known as Jennifer at the Centre) who had been found wandering the streets at only a few weeks old. And now, almost a year later, I took this collaboration as an opportunity to look back on the past ten or so months with Emmy and think about all the positives that have come from adopting her… 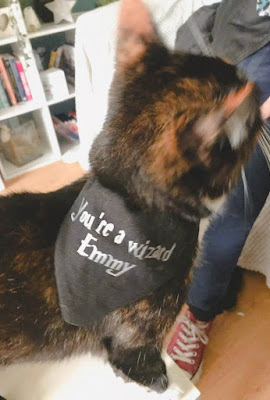 The importance of responsibility has been a huge lesson learnt in recent months. For so long, my mental health left me wondering if I’d ever have children because I thought that if I couldn’t take care of myself then how could I possibly take care of anyone else?! So, going into recovery, it almost felt like I deserved to have pets; as though because I’d worked my butt off in trauma therapy and Dialectical Behaviour Therapy sessions, I deserved the happiness and positivity that having a pet can bring. I deserved the love and affection. The fun and the responsibility. The dedication and the company. Taking responsibility for another life/lives was initially very daunting but now? It’s a motivation; knowing that I have someone else to look after can be a great help in fighting self-harm urges and suicidal thoughts. This was hard at first because I thought that I was a terrible person for being affected by the thought of leaving my pets behind more so than the thought of leaving my family and friends but I realized that the difference is; Emmy and Pixie rely on me in a very specific, and different way. 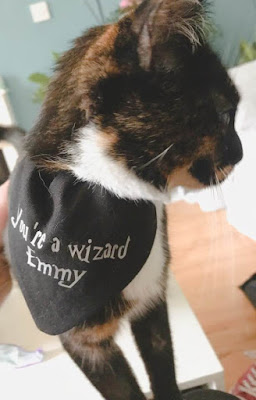 After years in therapy and having intensive inpatient psychology sessions, I’d become used to concentrating on myself, my mental health and my general wellbeing; so, when Dolly first took poorly in October (2018) I was hit with a sharp, and sudden insight into responsibility. I was thrown off balance when I suddenly realized that it really didn’t matter how I felt; Dolly was the priority and her health came first. Ironically, it seemed that just as soon as I got used to that notion; she was cruelly snatched from me and I was back to having to constantly consider my mental health and my own physical wellbeing. A lot of people questioned my determination to get a new kitten so soon (within a week) after Dolly was put to sleep and some thought that having Pixie should mean I still had some company and therefore I shouldn’t be desperate for more. But getting Emmy was about so much more than just having extra company for me and a friend for Pixie! 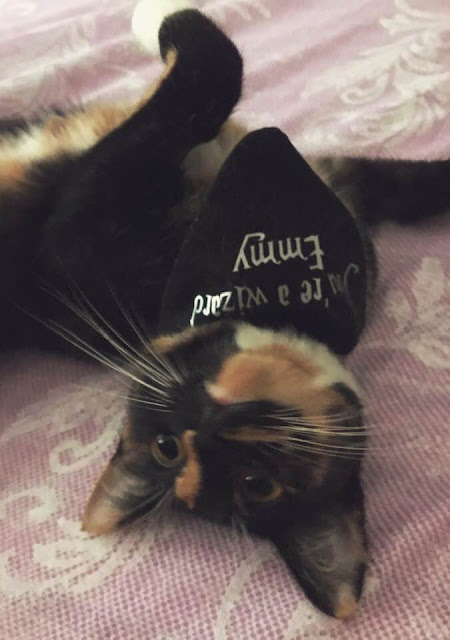 I honestly felt that I wouldn’t believe that Dolly was really gone while the hole remained in our family; and whilst Emmy obviously doesn’t fill that Dolly-shaped-hole, she keeps it from gaping wide open and allowing things to fall through it. Ironically, while Emmy helped me to accept Dolly’s death, she also helped me to then cope with it. Having Emmy meant that I had both a distraction and a new responsibility. I think that her being my first rescue pet helped too because knowing her difficult upbringing (she was found wandering the streets at only a few weeks old) gave me more motivation to provide her with the life that she – and all animals – deserve; a life filled with safety, happiness, and love. Coping with the loss of Dolly filled me with a strength I hadn’t known for a long time; it showed me that even when one of the worst things could happen, I would survive it. 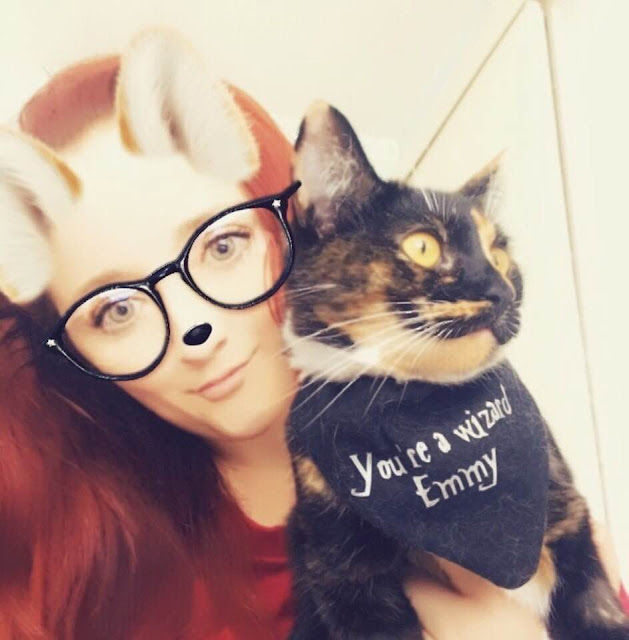